Learn about our work here...
Bring on the science 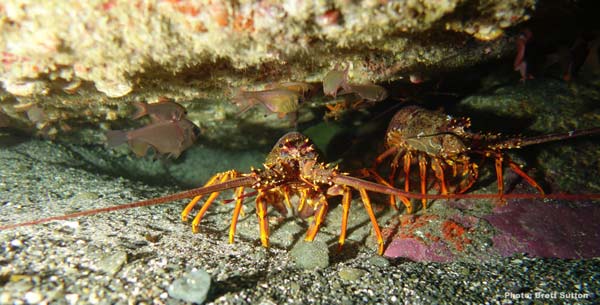 “Just getting in the water it was obvious there were a lot more crays inside the Rahui, especially packhorse”

Cray abundance in the Bay is generally considered to be pretty low at present and so Fish Forever has been keen to establish a monitoring programme that can track changes over time, and also to see what effect the Maunganui Bay (Deep Water Cove) Rahui is having. In 2016 Brett Sutton and his dive team carried out a pilot study to investigate the feasibility of a long-term monitoring programme. Marine Biologist Alice Morrison conducting fieldwork Photo: Brett SuttonBrett says that just getting in the water it was obvious there were a lot more crays inside the Rahui, especially packhorse. On average the rock lobster densities were about twice as high inside the Rahui than in the non-protected sites, and at some Rahui sites they were 7 times higher than outside. The average size of rock lobsters inside the Rahui was also bigger. Curiously there were even more very small crays (down to 20mm carapace length) in the no-take zone.

The results of this pilot study are encouraging as it showed that divers could quite quickly gain the skills needed to effectively sample rock lobsters. This means that a bigger survey with more sites could give us a good tool for monitoring the response of crayfish to future efforts to restore their abundance in the BOI.

Brett wishes to thank those that contributed to these projects whether as volunteers in the field (Alice Morrison for diving and Marcus Mabee for skippering) supplying local knowledge (Shane and Julia from Northland Dive) or giving technical advice (Dr Adam Smith, John Booth and Vince Kerr).

Brett is a biologist and commercial diver who grew up in Kerikeri and would love to have a no-take area in the Bay so people can see the marine eco-system in its natural state. 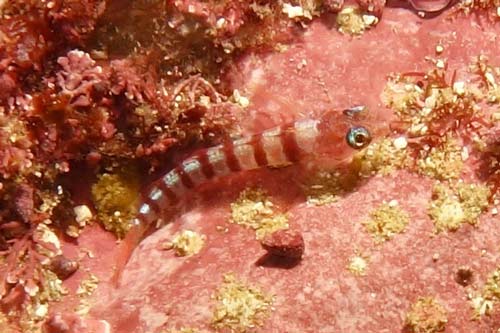 Even species that aren’t of interest to fishers are more abundant in no-take sanctuaries!

In the spring of 2016 Brett Sutton carried out the first survey to look at those tiny little fish, like the juvenile dwarf scorpionfish, that hide away on the bottom. Scientists refer to them as crypto-benthic fish, and we wanted to work out an affordable and effective way to monitor them in the Bay of Islands. In particular, were there more of them inside the Maunganui Bay Rahui, which has been a no-take area for 6 years now, compared to the rest of the Bay. The methods chosen were developed by Dr Adam Smith of Massey University and adapted for this pilot study. 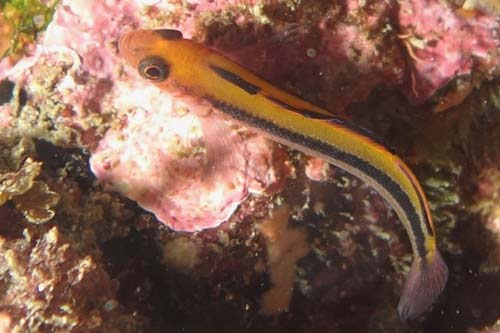 Oblique swimming triplefin. Photo: Brett SuttonThe survey focused on counting the triplefins, morays eels, slender roughy and bigeyes hiding out in the cracks, crevices, caves and kelp forests in the shallow rocky reef systems. At eight different locations around the Bay, the divers painstakingly looked in every nook and cranny of 320 square metres of quadrats. The team identified 17 different species of these small cryptic fish, with higher species diversity when the bottom habitat had more nooks, crannies and seaweed. Total densities were almost twice as high inside the Rahui than outside. Brett is happy the system works well enough to use for long-term monitoring and thanks Dr Smith for his advice.

Brett is a biologist and commercial diver who grew up in Kerikeri and would love to have a no-take area in the Bay so people can see the marine eco-system in its natural state. 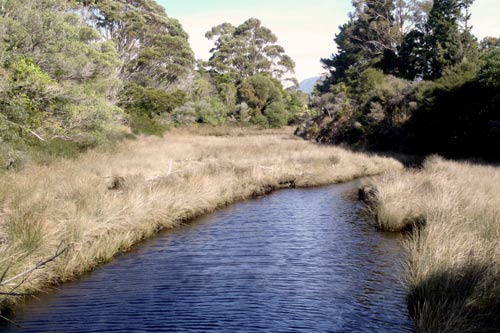 Photo: Vicky FroudeData on these rare and special sites will be invaluable for any future considerations for marine protected areas in the Bay.

We have some rare or special sites in the marine and estuarine habitats of the BOI and this 2016 survey set out to find the best of them. Using local knowledge, existing research data, and many hours in the water Vicky Froude and Chris Richmond identified 66 biotopes or ecological sequences that wouldn’t feature in representative habitat mapping.

There were caves and archways with low light and wonderful arrays of bryozoan and anemone wall covers. Some spots had unusual fish from the tropic’s like Lord Howe Coral Fish, Yellow Banded Perch and Mado. And, in the semi sheltered waters inside Ipipiri Islands there were very special rhodolith beds (calcareous gravels formed by red algae).

Waikino and Keratu wetlands were wonderful examples of extensive areas of relatively intact intertidal flats with a sequence of mangroves grading through saltmarsh into freshwater wetland. Such sequences are rare as so many of our coastal estuaries have been damaged by land development.

Froude, V. 2016. Rare and special marine and estuarine sites of the Bay of Islands, New Zealand

Vicky is a marine and terrestrial scientist, kayaker, diver and snorkeler, she would love to have marine protected areas closer to home with more fish and restored ecosystems. 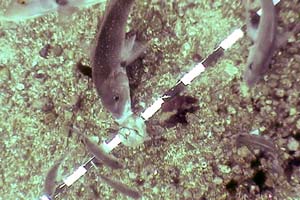 Vince is a biologist with a background in environmental education, and conservation management. He has been an active marine conservation campaigner for many years and is a founding member of Mountains to Sea Conservation Trust

We need large snapper and crays to eat kina, without them the kina mow down our luxuriant kelp forests and our inshore reef communities turn into kina barrens.

During 2016 Vicky Froude and Chris Richmond carried out an extensive survey of the Bay of Islands to find out what was living on our shallow rocky reefs. Earlier aerial photo comparisons indicated there had been a loss of kelp forests, so this survey was designed to ground truth that data. How extensive were the kina barrens? What kind of algal communities were out there?

Over 22 days they sampled 561 quadrats in the 3-12m depth range on exposed coasts, from Black Rocks to Tapeka, thru Ipipiri Islands to Cape Brett (all done by snorkel because of onerous health and safety rules for diving). Several relatively sheltered locations were also assessed (e.g. Waewaetorea and Okahu Passages, and Maunganui Bay).

Exposed coastlines of Eastern BOI contained 20-40% typical kina barrens. A further 10-17% was kina barrens where there was either declining or rejuvenating kelp cover, indicating kina and kelp cover is constantly changing in exposed shallow waters where storm damage might be a major factor.

Tapeka had comparable exposure to other sites in the Bay, but much more extensive typical kina barrens, up to 80%! This area was the most accessible site in the survey for recreational fishing and low snapper and cray abundance is likely to be contributing to this barren benthic community, as is the poor water clarity resulting from the large sediment loads being transported past Tapeka from the inner Bay of Islands.

This survey forms a good baseline from which to measure future change, particularly in response to any marine protection measures.

Vicky is a marine and terrestrial scientist, kayaker, diver and snorkeler, she would love to have marine protected areas closer to home with more fish and restored ecosystems.

Ever since the dramatic discovery in the Leigh Marine Reserve that kina barrens were not natural, the science and conservation communities have been interested in how extensive the loss of kelp forests along our northern coast is. 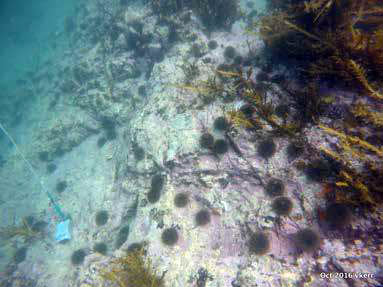 In 2016 Vince Kerr carried out a project to find out how well current aerial photography techniques were mapping kina barrens in the Bay of Islands. To do this he mapped 12 underwater transects at sites in the relatively sheltered shores in Maunganui Bay and the exposed coast lying between Maunganui Bay and Pig Gully.

From this survey, it is clear that kina barrens are much more extensive than maps drawn from the aerial photographs would suggest. The aerial mapping technique did pick up large kina barrens on gently sloping reefs. However, many kina barrens were found on steep or vertical reef slopes that did not show up in the aerial surveys. Similarly, the aerial surveys did not find the smaller patches of kina barrens which were prevalent at many of the transects in this study. Algal forests play an important role in the health of our coastal ecosystems. In particular they provide both food and shelter for a myriad of fish species. Fishing activity both contributes to the decline of inshore kelp forests and is likely to be negatively impacted by their loss.

This survey highlights the need for an effective long-term program to monitor the health of our inshore reefs. It would also be useful to find out the economic impact on recreational and commercial fishing resulting from the current decline of our kelp forests.

Vince is a biologist with a background in environmental education, and conservation management. He has been an active marine conservation campaigner for many years and is a founding member of Mountains to Sea Conservation Trust 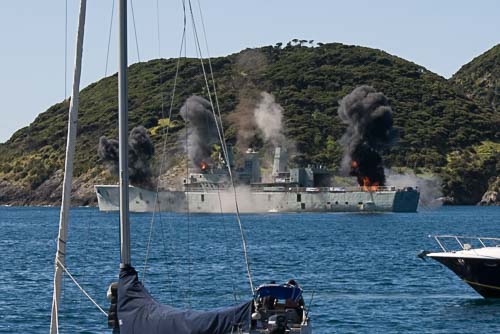 Booth, J. 2012. Marine communities associated with the frigate Canterbury and on nearby shores, eastern Bay of Islands

John was a shellfish research scientist with the National Institute of Water and Atmospheric Research, with interest in recruitment processes in spiny lobsters. He has been published widely in local and international science journals, and contributed to several books, on spiny lobsters and other invertebrates. He was a member of the Subantarctic Marine Protection Planning Forum which led to the establishment of MPAs around Campbell, Bounty and Antipodes Islands.