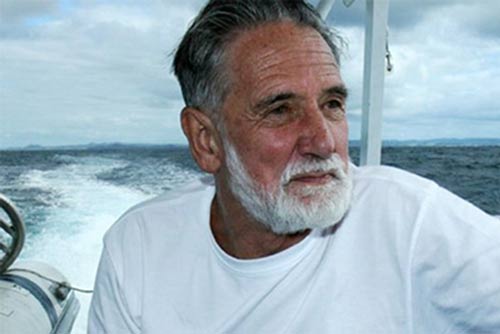 Wade is an experienced diver, prolific author and researcher, a marine reserve advocate and an all-round enthusiast for ocean systems and the biota that inhabit them. He has always supported Fish Forever’s work and so it’s a pleasure to be able to let him speak for himself here.

It also allowed him to give a timely tribute to Bill Ballantine, the father of marine conservation in New Zealand, who died earlier this month. (Nov 2015)

Wade, you have had so many adventures and done so much in your life - is there a single really stand-out accomplishment for you?

What is your favourite dive?

I honestly cannot arrange my millions of dives in any sort of hierarchy. Each time I breathe beneath the water I feel privileged. My generation were the 'first finners’; first humans to fly beneath the sea. I have just completed a 500-page book detailing them. I have kept good records of my dives from 1954. I have been obsessed with the undersea world in every sense of that word.

Fish Forever has proposed two marine reserves in the Bay of Islands. What are your views on the areas put forward?

If the protected areas are not big they are not worth having. Too many reserves have been whittled down to get them accepted. I once attended a seminar at Goat Island Marine Reserve on B.I. MR. (Barrier Island marine reserve tbc). The consensus of the attendees was as above; a learning curve for me. My scientist friends can provide ideas as to minimal areas. I would leave that aspect to them.

Sylvia Earle calls them "hope spots"; you call them "wet libraries of the sea". What makes marine reserves quite so magical? 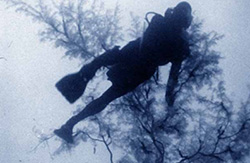 Marine Reserves turn the clock back for me to past glories. But none can replace vanished sights like the huge hapuku herds I once swam with or the giant tube sponges, black coral trees and mighty packhorse crays that I have illustrated my books with. I have lived too long. I once dived areas that are now dry land, saw cray feelers extending from intertidal pools, vast expanses of scallops, mussels, paua, all needing to live in high density at close proximity to breed. I recall flourishing kelp forests now kina barren deserts. I could never believe that those valuing kaimoana would oppose replenishment zones so vehemently. I guess they just don’t know how much we have lost. Without Marine Reserves they will never know. Nor will those who follow us.

Given the WWF's recent report, and all the factors that negatively affect our ocean, do you still have hope?

The ocean of our planet is doomed to high acidity, and all that follows as a consequence, unless we reduce carbon output. Already oyster farmers in the Pacific nor-west have to raise spat in pH-adjusted tanks. There is no argument about this. Atmospheric carbon levels determine the acidity of the ocean. When we make carbonated drinks we enjoy the acid bite. But we are carbonating the sea.

We were saddened by the news of Bill Ballantine's death. Would you like to offer some words of tribute?

The loss of this great man may give us all cause for reflection on his powerful drive for a network of no-take sanctuaries throughout NZ that would protect all kinds of habitats. His zeal and enthusiasm and inspirational endorsement and gentle kindness will be remembered by so many.

It is staggering to learn from all the wonderful tributes to Bill how many people he fired up and how effective that has been. And will continue. It was the same when he began at the Leigh Marine Lab in the early seventies and gave us divers, Kelly Tarlton, myself and our pioneer diving mates, live-in seminars there on the sea that we thought we knew but he understood and interpreted for us. He took us from spearing fish to studying them. He wrote introductions for my books and motivated me to write and write. I am just one of thousands whose button he pushed mightily. We all owe him so much to further his dreams to our utmost.