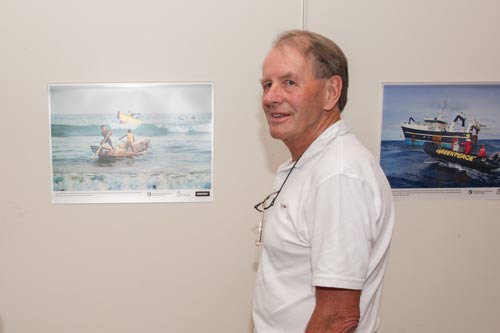 Sad news, David Clarkson, the man who established Bay of Islands Maritime Park Inc, way back in 2007 (the umbrella organization of Fish Forever and Living Waters) passed away at his home in Kerikeri last week.

David, 47 years a practicing vet, had a huge love of the Bay of Islands but was deeply concerned about our degrading streams, rivers and marine life.

He put an ad in the local paper calling a public meeting at the Waitangi Hotel. He asked those who shared his concerns to attend and to do something about the situation collectively. 140 like-minded people turned up.

From that beginning, Bay of Islands Maritime Park Inc was formed and dedicated people started working to realize David’s vision.

David's commitment to marine and catchment protection in the Bay of Islands galvanized the disparate conservationist and eco-minded community groups, and helped us to focus on the singular goal of achieving no-take areas here.

Alongside his commitment to this goal was his underlying belief that the entire community should walk the path together, Maori in step with Pakeha. This path was not a smooth one, but what remained true was David's integrity to his beliefs.

Fish Forever has endeavoured to capture these values, and let them guide our work. We are saddened that we could not celebrate the ultimate success with our founder and ljavascript:;ife member, David Clarkson.

Fish Forever, Living Waters and all members of the Bay of Islands Maritime Park extend their respect and condolences to David's family, and want them to know that we will hold the memory of David in the highest regard as we continue to pursue the goals that drove him.