No question about it. A highlight of any tiki-tour of New Zealand is when you get to rub limbs with one of our giant kauri, protected forever in its natural state within a forest remnant. Even we locals – who tend to take for granted this legacy – have our awe rekindled whenever we get to re-acquaint ourselves with one of these great spirits that link us with some remote past. 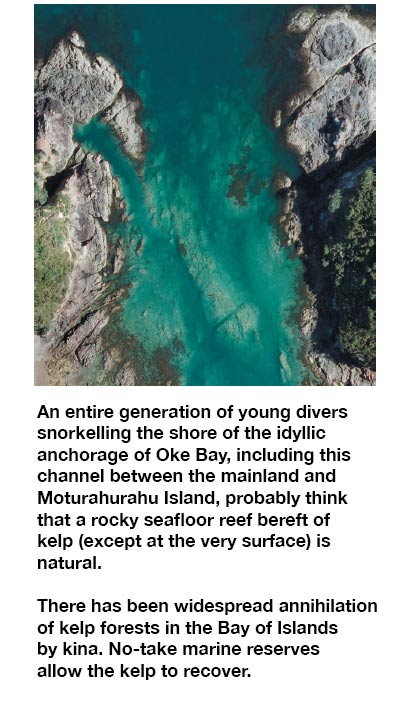 Certain individuals had the foresight – at a time that most bush was being bowled or burnt – to reserve areas, millions of years in the making, in their natural state. Kiwis and others would always be able to see what the forested landscape once looked like. To mill any today would be the last thing on your mind.

Strange, isn't it? We're keen to hold on to representative examples of original native land cover – yet are so reluctant to do anything similar for the sea. There are no places fully protected from fishing north of the Poor Knights Islands, right around the top and down to Taranaki. There is not a single possie easily accessed where you take your mokos to see a fully intact, functioning marine ecosystem. Decades of overfishing of certain key species (especially snapper and crayfish) have put the kybosh on close to two-thirds of the kelp forests of the Bay of Islands. Instead of teeming life associated with great seaweed forests, we find instead ghostly pale rock surfaces.

No-take marine reserves turn things around entirely: just visit the ones at Leigh or the Poor Knights. Large predators return, the kina are eaten, the kelp recovers. Banning only commercial fishing doesn't usually cut the mustard: at the Mimiwhangata Marine Park, where recreational fishing is still allowed, there has been little recovery.

We often glaze over when the kōrero shifts to such things as global agreements and national strategies. But New Zealand has – together with almost 200 others – added its thumbprint to the United Nations Convention on Biological Diversity. This is our commitment to help stem the tide of species loss and ecosystem destruction. The convention – and this is important – recognises that biological diversity is about more than plants, animals and micro-organisms and their ecosystems; it is about people and our need for food security, medicines, fresh air and water, shelter, and a clean and healthy environment in which to live.

The New Zealand Biodiversity Strategy has us setting aside representative examples of widespread ecosystems, as well as rare and special ones. There are many marine reserves to the south of us; it's high time for some here in the north. They would be our small koha to the world – as well as our contribution toward sustainability of resources for future generations. And, in turn, other nations are making their gift to us.

Fish Forever leads the charge for marine reserves in the Bay of Islands. After many months of consultation and research, they proposed two sites (also a scientific reserve) that take in a total of just over 6% of the waters of the Bay.

The proposed Waewaetorea Marine Reserve is centred on the islands of Okahu and Waewaetorea. The widespread ecosystems captured here include shallow and deep reefs, sheltered and exposed reef platforms, and sand and cobble seafloors. The special features of the area include the 'biogenic' seafloors – made up of plant and animal remains – between Waewaetorea and Motukiekie islands.

The Maunganui Marine Reserve is similar in size, but is a more exposed shore and has areas of strong upwelling. Maunganui Bay, with the scuttled frigate Canterbury – under a rahui due to expire later this year – would ideally become part of the reserve too.

Just as our forefathers did for kauri and other ecosystems on land, we should fully protect areas of the sea – now. And there are numerous other benefits to marine reserves: they are great crowd-pullers, leading to boundless economic opportunity; there is boundary spillover of fish and shellfish; they bring otherwise unlikely opportunities for education and high-level research; and you may feel that you're just doing the right thing for te tamariki o Tangaroa.

Visit www.fishforever.org.nz to view the detailed proposal, and make your submission online. You may want to suggest where other reserves are sited too. Submissions close on 13 June.